The Laker Anchor • May 17, 2022 • https://thelakeranchor.com/656/sports/competitive-cheer-dominates-in-3-peat-win-at-comstock-park/ 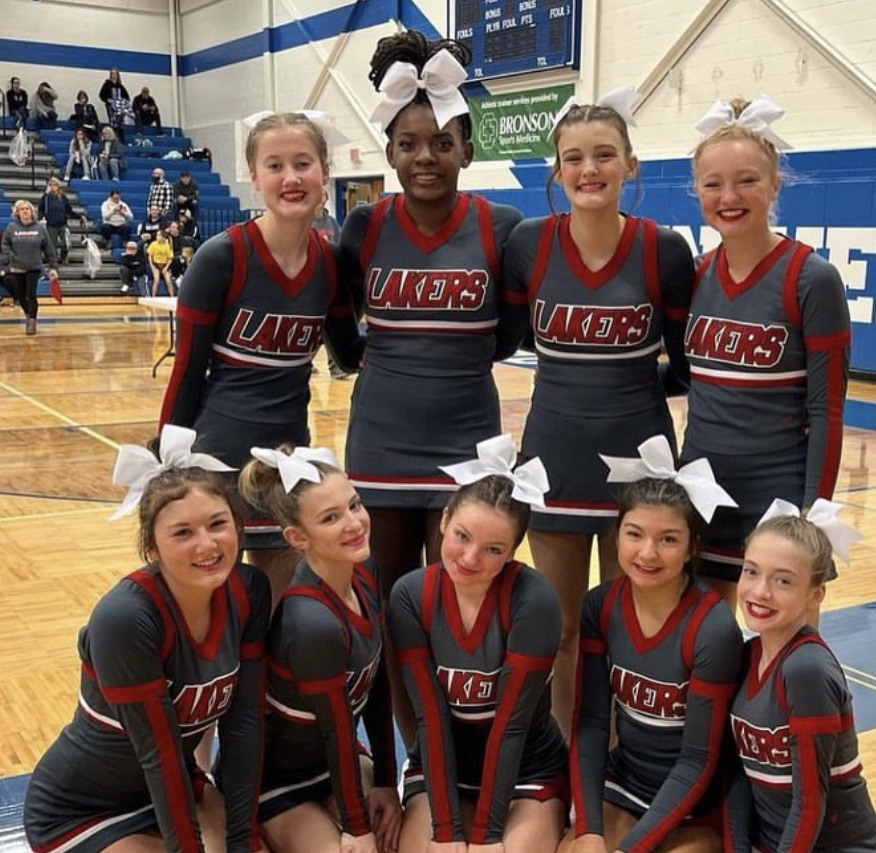 On January 8, 2021, the Competitive Cheer team went to Comstock Park for an invitational. Out of the 26 teams that were meant to compete, only 9 were able to come to the competition due to COVID and the weather. Even with the considerably fewer teams, the Lady Lakers were confident in their rounds. Going into round 1, the team felt ready to show the crowd what they got. A few bobbles in Round 1, but a confident Rounds 1 and 3, the girls showed everyone in the crowd what they’re made of.

The cheer team was able to make it out on top, taking first place in their division. Head Coach, Kendra DeRose said, “Comstock Park is always a fun, but challenging invitational. Taking first place was a big accomplishment for our small team of nine! I have been so impressed with the hard work and dedication of this team and I can’t wait to see where the rest of the season takes us!”

A couple of days later, the team traveled to West Catholic high school for their first conference competition of the season. The team’s goal is to be conference champs for the second year in a row. After strong rounds, the team managed to come out on top; less than a point above the second-place team, West Catholic. Assistant Coach, Kayla Young said: “A 1st place finish at our 1st conference meet is super exciting! You ladies all did a great job! Of course, there are always areas to improve in each round whether it be sticking our jump landing, punching our motions more, or hitting out stunts solid with no bobbles. Nevertheless, we pulled out the win which was rewarding and amazing! West Catholic, receiving 2nd place, was not dar behind us and they’re hungry for a win. So we can’t let up, we need to keep the pressure on! If we do that and if we perform the way we practice, we will have a very successful season!”

The team didn’t get to rest, just a short 2 days later, the team traveled to Ludington for another invitational. The team took the time to have fun for this competition, enjoying the fact that walk-in songs were requested by Ludington to help make this competition as much fun as possible. With a few bobbles in round 1, a strong round 2, and an even stronger round 3, the team not only took first place in their division but had the highest score overall. Senior, Alexis Kitchen said, “A third win is very exciting and reassuring as we did not know how we would do as such a small team/ Our team is so hardworking and determined I am confident that we have many more wins ahead of us!”

The team and coaches are ready to keep dominating on the mat. The team prepares to travel back to West Catholic on Saturday, January 22 for an invitational with hopes to keep their winning streak going. Furthermore, the team, coaches, and parents are getting ready to prepare for their home invitational on February, 2nd, as well as their last conference meet that they’ll host at the Middle School on February 8th. The Lady Lakers are ready to show everyone that they’re a small but powerful team!