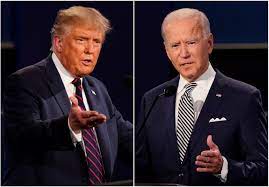 If you were flipping through channels on the evening of September 29th, you may have stumbled upon what you thought was the 2020 presidential debate. However, only several seconds of viewing would let you know that you were not, in fact, watching a presidential debate, but rather a circus act complete with two “clowns.” I’ve had middle school classroom debates with more professionalism. I remember, specifically, the seventh grade debate about whether Cleopatra was killed by a poisoned comb or an asp bite. Every thirteen year old in the vicinity was able to raise their hand and wait for their turn. It got pretty heated between the leading asp-bite nerd and the leading poisoned-comb geek. I mean the class was divided into two groups of ten but we all knew the debate was really between the two smart kids.

The thing that’s strange about Donald Trump and Joe Biden is that neither of them are the “smart kids” of the United States. The Democratic Party and the Republican Party would beg to differ, but we all know that in the Cleopatra debate, Joe and Don would both be sitting back with the rest of us watching the class nerds hash it out. Or maybe they would be the clueless kids vaping in the back, randomly interjecting some nonsense about asps or combs that everyone else would just ignore. The problem is, we can’t just ignore Trump and Biden. And if you were watching the first presidential debate of 2020, it was evident that neither knew about asps or poisoned combs.

The debate started with Donald Trump doing what Donald Trump does best: unconvincingly being his own hype-man and biggest fan. He used the delectable adjectives “great”, “good”, and even “fantastic” to describe Justice Barrett, the woman he nominated to succeed Ruth Bader Ginsburg.

Joe began to refute Trump’s nomination of Barrett, but his mind must have wandered because he took a sharp left turn into affordable healthcare. I hope he didn’t get whiplash from that subject changing. Swerving to avoid questions is not uncommon in political debates; I’m more concerned that Joe didn’t mean to change the topic. I think his train of thought simply fell right off the tracks. That happens a lot to him, poor guy. Imagine him in office: he’ll be trying to avoid nuclear war with North Korea, suddenly launch into a rant about the Green New Deal, and bada-bing, bada-boom, there’s a bomb in your front yard.

Not that Donald is much better. He speaks a whole lot of words without saying much of anything. Or, worse than that, he just starts spewing a bunch of nonsense. It’s almost as if he doesn’t realize we live in the age of the internet and his lies can be fact-checked by anyone with a cell phone in a matter of seconds.

The debate started to heat up right from the get-go. While typical debates go back and forth between candidates — that’s basically the definition of a debate — this debate was just everyone talking at the same time. Donald, specifically, was ready for a fight. I guess arguing with Joe wasn’t itching his debate scratch, because he decided to argue with the moderator as well. Chris Wallace sat helplessly by, trying to reel in the two grown men: “Mr. President… sir… Mr. President, please stop talking…” The constant interrupting coupled with the name calling — “clown”, “worst president we’ve ever had” — made me sure that I could not be watching a real presidential debate. It looked more like an SNL parody of a presidential debate.

The entire debate Joe Biden sounded minutes away from a power nap. You know, like the old man kind of power nap where they’re sitting in a church pew with their arms crossed and their heads bowed snoring quietly. I swear old men are the only living creatures that can fall asleep just about anywhere. Turbulent airplane? Out like a light. 3 pm football game? Snoring on the couch. Daughter’s wedding? Not even that can keep them awake. I know Trump and Biden are around the same age, but Joe just exuberates ‘Dad Nap’ energy. A few times during the debate, Joe forgot where he was. He stared into space, seemingly talking to the “American people.”

Finally, towards the end of the debate, Chris Wallace asked Donald Trump if he would condemn white supremacist groups. Donald fumbled with the question a bit. Then, like a little kiss-up younger sibling, Joe came in saying simply, “Of course.” Like when your mom gets mad at you for not cleaning your room and you try to come up with an excuse as to why you haven’t done it yet and your little sister comes out of nowhere to say, “I cleaned my room, Mom.”

All in all, the first presidential debate of 2020 was a complete and utter mess. No one could talk without the other interrupting and talking over them or throwing insults their way. Oh, but we can’t forget that Don brought back football! And that’s about the only thing of substance I can recall from the debate — if you can call it that. If you were watching, you were probably as confused as I was as to how these two men, Joe Biden and Donald Trump, are the cream of the crop. Is this really the best we, as a country, can do? One of these “clowns” is going to be our next president, for Pete’s sake!

In all seriousness, if you’re eighteen or older, please remember to vote this November. With that said, I’m glad to be sixteen because how do you choose between these two “clowns”.